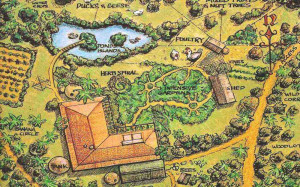 Permaculture is the conscious design and maintenance of agriculturally productive systems which have the diversity, stability, and resilience of natural ecosystems. It is the harmonious integration of the landscape with people providing their food, energy, shelter and other material and non-material needs in a sustainable way.Without permanent agreiculture there is no possibility of a stable social order.

Permaculture design is a system of assembling conceptual, material, and strategic components in a pattern which functions to benefit life in al its forms.

What is the origin of permaculture?

Permaculture was created in the 1970’s by Bill Mollison, an Australian ecologist and University of Tasmania professor. He had spent many years out in nature as a wildlife biologist observing how natural systems work and became very distressed at the destruction that he saw going on around him. He decided that instead of being angry about what was happening and reacting against the destruction he wanted to work on creating a positive solution And he thought the solution would be living based on the patterns he had observed in nature.

By observing nature, Mollison came up with several important insights. He observed that natural systems, such as forests and wetlands, are sustainable. They provide for their own energy needs and recycle their own wastes. He also observed that all the different parts of a natural ecosystem work together. Each component of the system performs important tasks. For example, bees help to pollinate, birds provide pest control, certain plants pull nitrogen out of the air and fix it into a form that other plants can use. So everything does useful work. He applied these and other insights to design and create sustainable agricultural systems.

In the 1970’s he and his student David Holmgren wrote and published some books explaining his ideas. In the 1980s he published his design manual and started teaching permaculture design courses to spread his ideas around the world. By the 1990s permaculture had started spreading throughout the US, although it’s more well-known in other countries around the world. To this day, it’s continuing to grow as a global grassroots movement and people primarily learn about it through permaculture design courses and workshops that generally happen outside of academia.

To learn more about permaculture visit